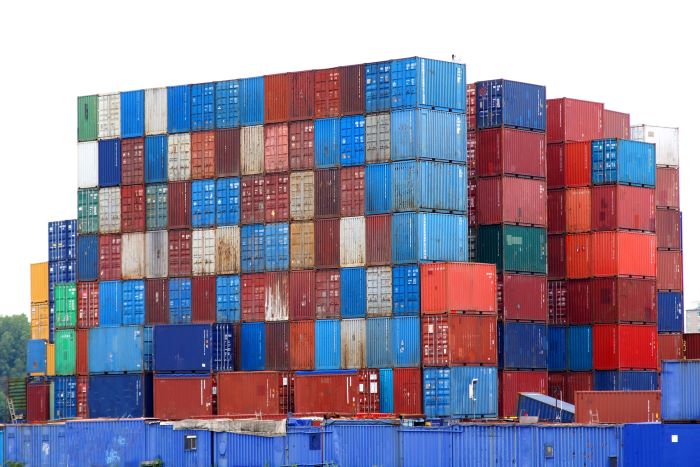 Retailers say US import comparisons with early 2019 will be skewed due to tariffs and the timing of the Lunar New Year. Photo credit: Shutterstock.com.

Retailers project a slow beginning to 2020 before imports pick up in the spring and the eastbound trans-Pacific trades return to normal seasonal trends.

The projection by Global Port Tracker, which is published monthly by the National Retail Federation (NRF) and Hackett Associates, assumes that the United States and China will continue to proceed toward a resolution to the costly trade war now in its second year. The tariffs and counter-tariffs by both countries have harmed both imports and exports in the trans-Pacific.

“We’ll be more confident after we see the Phase One agreement signed [on Jan. 15], but right now 2020 looks like it should be back to what used to be normal,” said Jonathan Gold, NRF vice president for supply chain and customs policy.

Global Port Tracker forecasts US imports will decline 5 percent in January and 4.9 percent in February from the same months last year. Imports in March are forecast to increase 5.2 percent from March 2019.

In addition to comparisons with the unconventional trade flows that took place in late 2018 and early 2019 due to the tariffs, import comparisons in the first three months of 2020 will be affected by the timing of Lunar New Year, when many factories in Asia will close for a week or two for the celebrations. The Lunar New Year will begin on Jan. 25, which is earlier than last year, and therefore year-over-year comparisons will be somewhat skewed in February and March.

Return to normal beginning in April

Global Port Tracker projects imports will increase 2.1 percent in April and 1 percent in May, year over year. This return to normal increases in the spring and summer leading up to the back-to-school and holiday shopping seasons in the second half of the year looks to be back on track, provided there are no major disruptions due to tariffs, such as occurred in 2018-19.

“We’ve been through a cycle of imports surging ahead of expected tariff increases, some of which got delayed, reduced, or canceled, and falling off again afterward. That’s not good for retailers trying to manage their inventory levels or trying to make long-term business plans,” Gold said.

The phase one US-China trade agreement is scheduled to be signed on Wednesday. In announcing the deal, the Trump administration said it would halve 15 percent tariffs that took effect in September and cancel another round that was set to take effect Dec. 15. Other tariffs — 25 percent on $250 billion worth of US imports from China — will remain in effect under the phase one agreement.

US imports in November, the last month for which actual numbers are available, showed a drop of 7.5 percent from November 2018. Global Port Tracker estimated December imports plunged 13.4 percent from tariff-inflated import volumes in December 2018. Its estimate for calendar year 2019 is for a 0.9 percent decline in imports.

Spot shipping rates, which normally reflect import volumes in close to real time, declined steadily in late 2019 due to the fall in imports. However, with implementation on Jan. 1 of the International Maritime Organization’s low-sulfur fuel mandate, spot rates are increasing.

The spot rate includes the base ocean shipping rate plus a bunker fuel surcharge. The East Coast spot rate ended 2019 at $2,562 per FEU, and as of Friday has increased to $2,888 per FEU. The West Coast spot rate increased from $1,434 per FEU in late December to $1,543 this week, according to the Shanghai Containerized Freight Index (SCFI), which is published in the JOC Shipping & Logistics Pricing Hub.