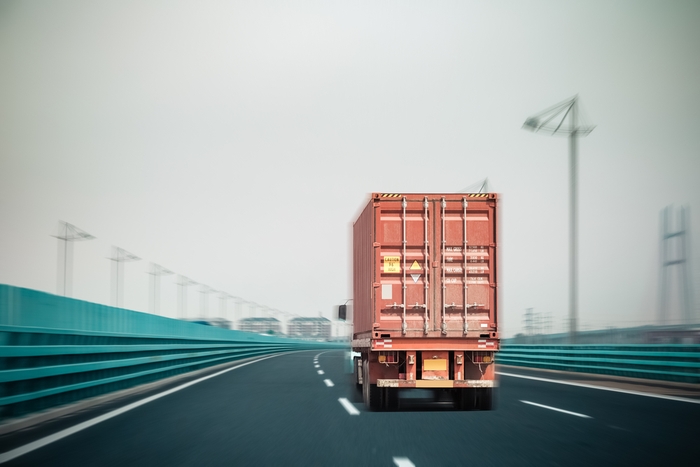 Truck drivers in China must apply for permits to make cross-provincial cargo transits, in which they must prove that there is an urgent need for their cargo to be delivered before the coronavirus travel restrictions are lifted. Photo credit: Shutterstock.com.

China’s response to the coronavirus and carrier reaction to the extended Chinese New Year holidays will cut the country’s first quarter container volume by more than 6 million TEU, and shave 0.7 percent off global volume for the full year, according to Alphaliner.

It is the first real estimate of the virus’ impact on the container supply chain, with data collected by the analyst on weekly container vessel calls at the main Chinese ports showing a decline of 20 percent since Jan. 20.

Because the extended void sailing programs on long haul services were slated to continue until mid-March, the analyst warned that any cargo volume recovery could be negatively affected, even after the holidays end.

“The full impact of the Chinese coronavirus outbreak on container volumes will not be fully measurable until ports announce their throughput numbers for the first quarter,” Alphaliner noted in its weekly newsletter.

Beijing has extended the Chinese New Year holidays by a week and factories are supposed to reopen on Feb. 10, but as the number of deaths and infections rises, that date might be extended further. There are also severe travel restrictions in force across most of the country and limited cross-provincial movement, so even if the holiday ends this weekend, the factories’ migrant workforce will find it difficult to get to work.

Hard to beat the backlog

The travel curbs and health screenings are also hampering the transport of a backlog of cargo that was scheduled to move from distribution centers to ports for loading after Chinese New Year.

“There are checks on all major highways, toll booths, and smaller trunk roads, which has caused major traffic bottlenecks,” he told JOC.com from his Shanghai base. “The majority of drivers are unable to return to duty as they are facing challenges on travel restrictions.”

“Everything depends on the trucking companies and how fast they can get workers back to work,” Reichel added. “They are the first link to every terminal for ocean, rail, and air.”

DHL’s Resilience360 said full or partial border closures from Central Asia, Russia, Mongolia, and Southeast Asia have impacted cross-border road freight as well as rail freight. The risk-assessing unit of DHL said in a statement that interprovincial shipments within China were also likely to experience delays because of the highway checkpoints, “particularly to and from Wuhan and Hubei province, which remains under quarantine until at least Feb. 14.”

However, carriers say terminal operations are continuing at all ports except Wuhan, about 700 miles up the Yangtze River, where operations have been suspended since Jan. 23. Alphaliner reports that Wuhan, epicenter of the coronavirus outbreak, handled 1.7 million TEU in 2019, accounting for 0.6 percent of total Chinese port throughput.

Several carriers have announced that free time for containers at their China terminals will be extended until Feb. 9.

Resilience360 pointed out that while terminal operations in China were continuing, apart from ports along the Yangtze River where barge services have been suspended, delays might be expected at ports worldwide accepting bookings to China if cargo was required to be held for a longer period, causing storage and equipment demurrage costs.

Air cargo has been the mode worst affected by the coronavirus. More than 25,000 passenger flights to China have so far been suspended in a bid to prevent the spread of the virus, according to analyst OAG Aviation Worldwide. This has removed a huge amount of long-haul belly cargo capacity from the market, and freighters are also operating reduced schedules.

When air is affected, shippers turn to rail, and forwarders and rail operators are bracing for the expected rush to secure capacity on the China-Europe networks.

“Demand will be for whatever mode is running, and that is rail, so a lot of cargo will come to us from other modes,” Igor Tambaca, managing director at Rail Bridge Cargo, told a Railfreight.com webinar Tuesday. “My advice is, book your cargo on rail as fast as possible, and look for other sourcing regions.”

Shippers are expecting significant delays to their China imports as factories remain closed. The logistics director for a German importer handling 15,000 TEU a year told JOC.com that space would be tight in the last week of February, and he was planning for a delay of three to four weeks for all deliveries of Europe containers.